The double tragedy marked the appearance and the soul of capital city. Volunteers and teams of professional rescuers didn’t hesitate to come offering their help. But the debris are many and the area itself can easily be shaken by earthquakes due to the morphology of its soil.

Teams of rescuers are working hard looking for victims remained trapped under the rubble. Luis Felipe Puente – coordinator of the Mexico’s Civil Protection – assures that the search for people may continue for a few more weeks until anyone missing will be found. Volunteers are coming from Mexico and beyond to the disaster area to support the efforts of search teams already working there, sent by the US, Japan, Israel and Spain. The volunteer rescue operations are coordinated by the Moles, the country’s elite team, created in reaction of the tremendous earthquake of 1985. Meanwhile, the death toll has risen to 326 and the hope to find more survivors diminishes every day.

It is difficult to go back to ordinary life: people are frightened and continued to call the police for signalling new cracks appearing in buildings that resisted to both earthquakes. Even the rescued ones are traumatized. On Monday, employees were sitting on the sidewalk in front of their workplaces instead of entering the buildings they judged likely to collapse because of the cracks. In addition, just 676 of almost 9000 schools in Mexico City reopened on Tuesday, forcing thousands of children to stay home. 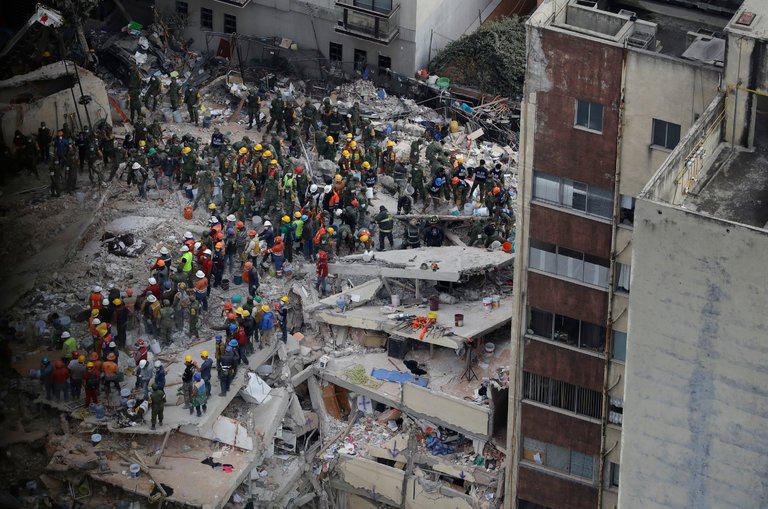 Photo published in The New York Times on October 2nd 2017.

Furthermore, the Education Secretary affirmed that two to three weeks will be necessary to declare all schools to be a safe place. There is a serious risk of delayed collapse as showed by the crash of the Cupola of Our Lady of Angels Church, which happened on Sunday. Currently, 360 buildings are under red level alert, meaning that they will either be demolished or at least undergo structural reinforcement. In the meanwhile, more than 1100 buildings are considered to be reparable.

The landscape of rubble that one can see in Mexico City is due to two earthquakes that occurred in the area in the last weeks. The first one – 8.1 magnitude – happened on September 7th. The second one – 7.1 magnitude – came soon after, on September 19th. This time, almost synchronised, the Popocatepetl volcano made a small eruption, even if it is currently unclear whether the two events are connected. The second earthquake happened as Mexico City was commemorating the deadly earthquake of 1985, which caused between 5’000 and 10’000 of deaths and left thousands of people homeless. The very high death toll was mainly caused by unsafe buildings. Following the catastrophe, the Damnificados movement arose with the aim of fighting corruption and sensitize the government about the concern of poverty and vulnerability in informal settlements, and particularly the fact that the metropolitan zone keeps growing under high-risk conditions.

Mexico City lays on a particularly vulnerable area for earthquakes. The entire city and its surroundings, which count around 20 million inhabitants, are based on former lake bed whose soil amplifies the effects of the shakes hundreds of kilometres away. So often the earthquakes are due to the clashing tectonic plates, but this time it was not the case. In fact, the cause of this natural disaster is likely to be the rupture inside a plate.

Globally, we can observe a reduction in the number of victims hit by the quakes thanks to the improvements adopted in the safety laws and measures for a better disaster preparation. The matter is that the alert mechanism, that is supposed to sound and warn the population of the danger coming, didn’t sound properly on Tuesday.