President Trump congratulated Puerto Ricans, minimizing their 34 victims in comparison with the 1800 people dead after hurricane Katrina in 2005. But this does not change the fact that now the country has to cope with the destruction and the reconstruction. Thanks to the aides coming, people are countering fear by solidarity.

Trump visited Puerto Rico on October 3rd, two weeks after the island had been turned upside-down by category 5 hurricane Maria. At a time when the Trump administration was already being accused of not intervening promptly in favor of the population of Puerto Rico and the U.S. Virgin Islands. Besides, the President addressed to the people in pain diminishing the extension of the event. In particular, a few statements in his speech sounded inappropriate and unrealistic, such as “you’ve thrown our budget a little out of whack […] and that’s fine. We’ve saved a lot of lives.” and “you won’t need them anymore”, referring to flashlights in a stand of relief supplies. 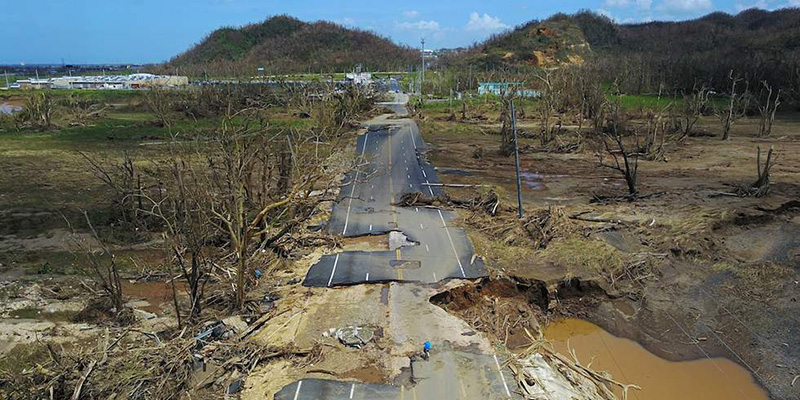 In fact, the situation is critical: as we write this article, part of the telecommunications, that had been completely cut off, has been partially re-established, but there is no electricity nor running water yet. People have to spend hours waiting in line at gas stations or ATMs. Hospitals and food banks are running out of fuel for their generators so that they cannot keep the lights on and not even preserve food provisions from perishing. Aides are sent by the government, but there aren’t enough truck drivers or fuel for the trucks to deliver water, food and other provisions. After all, the roads are muddy or interrupted by fallen trees when they still exist. The bridges had a similar fate. Moreover, it rains every day for ten or fifteen minutes, which is enough time for rubble to slide on the roads that had already been cleared beforehand.

Puerto Rico’s economy had been going through a recession since 2006, when the Congress ended the privileges on taxes for investments coming from the US, causing the local economy to stop growing. In addition, the rate of unemployment was rising, driving the island’s residents to move to the mainland, mainly to Florida and Texas. Given the severe destruction caused by Maria and the long recovery it will take, the exodus to the US is likely to worsen.

Meanwhile, one can witness the solidarity among neighbours. Since the disaster, the number of burglaries has not increased; instead, people spontaneously give a hand to each other and shared their provisions. Even President Trump was impressed by the resilience, animated by the strength of their culture. “I’ve never seen people working so hard in my life”, he acknowledged.

Hurricane Maria has devastated the Caribbean, following the footsteps of its predecessor Irma. Actually, Puerto Rico is not alone in facing the consequences of the event. More than 1600 people abandoned Barbuda because 95% of houses and businesses on the island were destroyed. A major part of the US Virgin Islands still find themselves without electricity. In Dominica 27 people lost their life and even the Prime Minister was left homeless. Cuba counted 10 killed and many fragile buildings collapsed. In the British Virgin Islands the communication and electricity remain out of order.

So far, the result is already alarming but Maria hasn’t finished yet: according to forecasts of October 4th,, its winds have weakened. At that time, there was the risk that it could join hurricane Lee to hit the shores of the UK by the weekend. But the forecast changed and now the UK will have to face the remnants of another hurricane, that is hurricane Nate that left thousands of people without power in the American Gulf. The Northern and Western British regions are expecting heavy rains and strong winds for today.